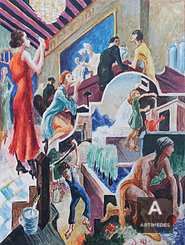 Benton was a painter and muralist who was a leader in the Regionalist art movement. The son of a politician, he rebelled to pursue art and was supported emotionally and financially by his mother. He studied in Chicago and Paris and eventually came to live for over 20 years in NYC. During WWI, he served in the Navy doing work that he considered the most important to himself as an artist. He was directed to illustrate life in the naval yard and drew camouflaged ships so they could be painted accurately and to aid in identifying lost ships. Benton was muralist who portrayed realities that some people did not want recognized such as slavery and the KKK. He was perhaps the most important painter of the American scene.